Patchwork quilt history would not be what it is today without passionate people like quilt historian Jeananne Wright or Magdalena Wegrzyn of the Longmont Times, who make this information available to all. 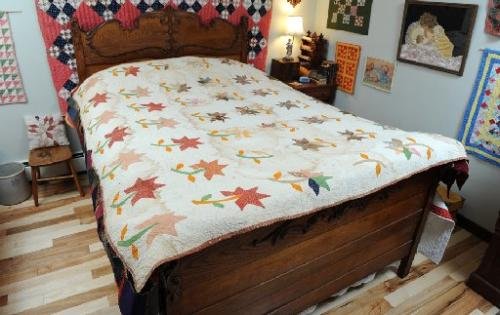 "Pea Ridge Lily." This cotton quilt was likely made in the late 1850s by the Pope family of Pea Ridge, Ark. During the Civil War, the family buried the quilt in the ground for safekeeping before the Battle of Pea Ridge, a three-day struggle that started on March 6, 1862, and eventually secured Missouri and northern Arkansas for the Union. ( LEWIS GEYER ) 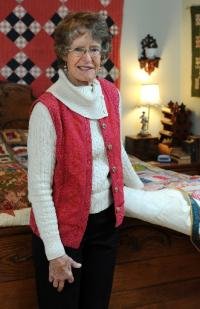 Longmont resident Jeananne Wright was the featured quilter at the Interfaith Quilters annual show in March. Wright is a speaker, quilt historian and American Quilt Society certified appraiser. She began making quilts in 1963 and now has one of the largest and most complete quilt collections in the country. ( LEWIS GEYER )

LONGMONT -- The cream-colored quilt covered in colorful lilies was so beloved that the family folded it into a wooden box and buried it in their backyard to spare it from falling into enemy hands.

On March 6, 1862, Union forces marched into Pea Ridge, Ark., beginning the Civil War battle that secured Missouri and northern Arkansas for the North. The Pope family, whose land turned into a battleground, buried their family quilt in the ground for safekeeping before they fled.

While it was buried -- no one knows for sure how long it was before the family returned to dig it up -- rain seeped through the box and caused the colors to run, leaving behind coffee-colored stains. A rodent nibbled through the binding on one side. Occasionally, a small duck pinfeather wrestles free and pokes through the quilt top.

Despite its battle scars, it's one of her favourite pieces. Out of a collection of more than 600 quilts dating from 1811 through the present day, that's saying something. And it's the story behind the fabric that the 71-year-old said fuels her passions. 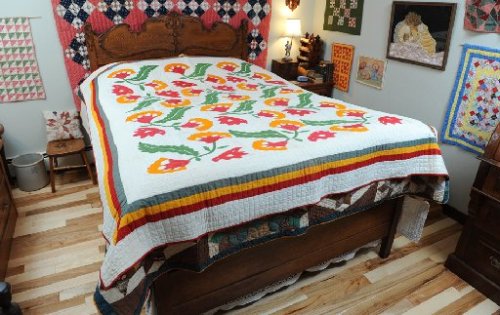 "Cockscomb and Prince's Feather." Susan Adair, originally of Missouri, began making the quilt in 1859 and finished it in 1917. After hearing about potential gold in Colorado, she and her husband settled in Blackhawk, where she made this quilt. It is the oldest documented quilt made in Colorado. ( LEWIS GEYER )

This article has been reproduced with the permission of Magdalena Wegrzgn.